RUG-BALL is a Japanese made LED bulb made by Ecolighting Japan.It can replace mercury-vapor lamp bulbs to LED.
Mercury-vapor lamps are prohibited from being manufactured, imported and exported by the Minamata Convention on Mercury in 2020.
Conventional LEDs are suffering from flickering (flicker) and glare (glare), which has been considered unsuitable for floodlight.However, RUG-BALL has cleared all such problems.


About Minamata Convention on Mercury.

On January 19, 2013, "Minamata Convention on Mercury" was concluded in Geneva.
This treaty is based on the Minamata disease that occurred in Kumamoto Prefecture , Japan.Minamata disease is a pollution incident confirmed in 1956.
The chemical industrial company was shedding wastewater containing mercury directly to the sea.
Central nervous system disease appeared in the person who ate the seafood fish and shellfish.
As pollution cases, the second largest number of victims in the world, it is said that the number of affected people is more than 20,000 people. It has been nearly 60 years since confirming Minamata disease, but the number of patients still exceeds 5,000.
A similar incident has taken place all over the world, and even now it is not settled.Therefore, the use of mercury is regulated on a global scale.
"Minamata Convention on Mercury" is an international treaty, and its entry into force in 2020.
This limits the manufacture and import / export of mercury products. Mercury lamps are no exception.
It is necessary to change the lighting after the life of the mercury lamp you are currently using.Products using mercury include batteries, high-pressure mercury lamps, mercury thermometers, fluorescent lamps, and switches.
Mercury is not used for batteries except for some button batteries already. 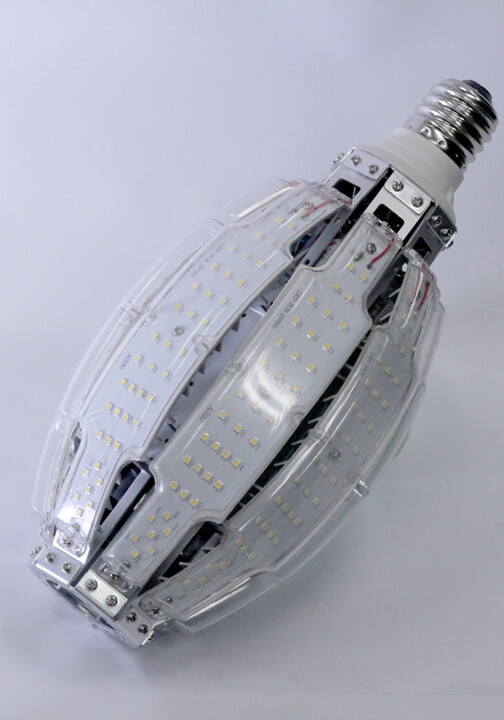 Among HID lamps, high-intensity lamp metal halide lamps, high pressure sodium lamps, etc. are outside the scope of the Minamata Convention.However, there are disadvantages such as the size of power consumption, poor color rendering properties, and the fact that the product itself is expensive.

However, such problems are now solved.There is no reason not to choose the LED.

The LED bulb will only light up in direct current.An apparatus that converts supplied AC power to DC is called driver.Since the power supply unit is built in the LED light bulb "RUG- BALL",
there is no need to purchase separately.

☆independent power supply unit, the device does not go out at once

"RUG-BALL" has a built-in Driver. Even if only one light breaks down, other LEDs will keep lighting. If it fails after the warranty period, you can also replace every one light.

The LED bulb has very little other power consumption. Therefore, you can lower electricity bills.

When compared to incandescent light bulbs of the same brightness, the LED bulb is about 1/5 the power consumption.

The fact that the power consumption is low means that the electricity bill is also reduced by about 1/5.

The table on the left is a trial calculation chart of electric cost.We calculate the power consumption of the mercury lamp and the electricity charge of

the RUG-BALL as a general electricity charge.

Also, the LED bulb has a long life. The life of an incandescent lamp is generally said to be around 1,000 to 2,000 hours.

The lifetime of a fluorescent lamp is said to be around 13,000 hours.

On the other hand, it is said that the lifetime of the LED bulb is about 40,000 hours.

The power consumption of LED bulbs is much less than incandescent light bulbs, and it is said that the life span is longer than any bulb.

When replacing with LED, you need to remove the ballast and install LED driver .

However, RUG-BALL has a built-in power supply driver.

Therefore, removing the stabilizer and connecting the wiring directly will complete the construction.

* If ballast is installed, simple construction by electrician is required.

Since laws differ depending on the country, please check the laws and regulations.

RUG-BALL has a dust-proof and rain-proof structure.

You can use in dust, and humid places such as factories and construction sites.

※Please avoid using for a long time in the rain.

The total weight is 0.7 kg and it is lightweight.

Input voltage is a universal power supply of 90 ~ 240V. It has Protection Class IP62.

The total weight is 1.1 kg and it is lightweight.

Input voltage is a universal power supply of 90 ~ 240V. It has Protection Class IP62.

The total weight is 1.1 kg and it is lightweight.

Be sure to turn off the power before installing, removing or cleaning the equipment. There is a danger of electric shock.

Any inquiry or request for information, please click here.